skip to main | skip to sidebar

I read this a second time. This is a fantastic novel.

Second time around, it feels richer. There's a lot of build up to later events that you don't notice the first time. Clarke's fairies are chilling and cool, and the historical references are fun.

Read this.
Filed as:
Posted by Unknown at 21:54 No comments:

Ghost Dog: I spent ages tracking down a copy of this and then wasn't in the mood to watch it for a month. Finally did on Saturday and it was just as amazing as I remembered. Such a wonderfully constructed film - the quotes about the Way of the Samurai, Ghost Dog & Raymonds amazing friendship despite not sharing a language, the bear motif (notice Pearline's pajamas in the last shot!), the crazy hasbeen mafia guys, the music, the way Forest Whitaker is so absolutely cool. Definitely in my top five films ever, possibly number one.

Kung Fu Hustle: Funny, ludicrous kung-fu film. Nice Leone and Tarantino moments add some extra bizarreness. Got to be the number two weirdest kung fu film I have ever seen (it turns out the writer, Stephen Chow, co-wrote my number one weirdest - Forbidden City Cop - as well).

Lords of Dogtown: Okay biopic about Stacy Peralta, Tony Alva, Jay Adams and the rest of the legendary Dogtown skaters. Made by Peralta, you get the feeling that he's building up his own idea of the legend. Vastly inferior to his documentary about the same topic, Dogtown and Z-boys.
Filed as:
Posted by Unknown at 19:55 No comments:

Email ThisBlogThis!Share to TwitterShare to FacebookShare to Pinterest
Labels: film

The Power 19 and more on Badass Space Marines

Okay, I think I'm going to have to go through the power 19 for my designs.

I'm half stuck on Ron Edwards' comment on Badass Space Marines in the design thread at the Forge. I can see what he's getting at, and I'm pretty sure that would be an awesome game. However, it's a game with almost nothing in common with Badass Space Marines.

Badass Space Marines as it is right now is a really fun game for simulating a certain type of big dumb action movie. I think it would be pretty easy to make it broader, so that it was the Big Dumb Action Movie game, which would be okay but isn't really a compelling idea. To make it deeper, it seems like I would have to start from scratch, and write a different game. Hard stuff to process.
Filed as:
Posted by Unknown at 10:14 5 comments:

The Darwins ready to attend the Jubilee party 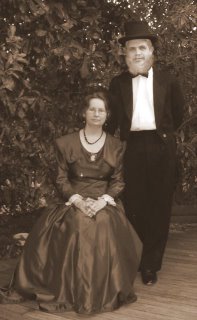 Here are me and Make Tea Not War in our fancy dress as Charles and Emma Darwin for the Kapcon XV live game.

Badass Space Marines: Design thread at The Forge as well

Here I make a feeble effort to respond to everything Hix had written about it. Phew.
Filed as:
Posted by Unknown at 19:22 No comments:

I have started an actual play thread about the con games here. Please comment if you were there.
Filed as:
Posted by Unknown at 19:13 3 comments:

I have posted my general day-after impressions of the con. Overall, excellent. It gets better each year.

The Devil & The Deep ran okay. I think it's a bit out there for a con game, really. It doesn't grab people right in, but builds up. More suited to 3-6 session game lengths. Too bad.

Badass Space Marines played great. It's the opposite - perfect con material. A few people had moments of wanting to play traditional rpg style but these where over in seconds rather than minutes. Awesome.
Filed as:
Posted by Unknown at 07:49 No comments:

Any gamers within a day's journey of Wellington should go to Kapcon this weekend. That is all.

On The Origin Of Species by Charles Darwin

I have now finished two of the four in the big Darwin book.

Origin of Species was very good. Most of it is still relevant, and it's a great explanation of natural selection for a lay reader (as long as they're prepared for a long argument). There's a lot of interesting discussion of things that are kind of taken for granted in modern surveys. It's also interesting to see where the gaps in knowledge left him unable to complete certain pieces of the puzzle.

Definitely worth a read, especially if you have been kind of meaning to get around to it. I have for about ten or fifteen years now, and I should have done so sooner.
Filed as:
Posted by Unknown at 22:11 No comments:

New Zealand Roleplaying and Gaming is a new blog/news/forum/etc to replace RPG Central. Local readers, check it out.

Guaranteed to be more stable than Central (literally - it's on a commercial webhost service with 9.99% uptime).
Filed as:
Posted by Unknown at 22:08 No comments:

As expected, a fun read with silly things going on at a country house. Different in style to the Jeeves & Wooster stories, which is a nice change. Hard to describe how the style is different exactly - maybe just that many of the characters are Americans?
Filed as:
Posted by Unknown at 12:19 1 comment:

The Merchant Princes by Charles Stross

So after many months of seeing only volume two (The Hidden Family) of this series in the library, finally they had number one (The Family Trade) as well. If you trawled through all my book reports last year you'll know I'm a fan of Mr Stross already, and I was interested to see what his fantasy novels were like.

The quick version is that they are fun, interesting and not really fantasy novels. Not in the way people normally mean that, anyhow. Sure, there are some people who have this one magic thing they can do (trivial spoiler: they can travel to an alternate Earth), but the style and subject matter comes across like... well, like Stross's SF novels. Implicit in that description is a real appreciation of them being written in clear, normal English, they are an appropriate length for the stories and there is not a single page long description of anyone's clothing.

The magic really just serves as a jumping off point for Stross to explore the effects it would have on a medieval world (the magic comes from there originally) and other effects and implications of it all. He has a number of cool ideas in these two books and I am looking forward to seeing how they pan out in the next few (his blog says there will be at least three more).

On top of this, there's an exciting thriller. Great stuff, keep them coming...
Filed as:
Posted by Unknown at 21:12 No comments:

On Monday, the regular group suffered me to run them through a first draft of Badass Space Marines. It went well in terms of being a bunch of fun.

It also showed that the initial rules draft required some major changes, which are the topic of this post.

I was surprised by my fairly handwavey calculations balancing gamemaster and player Fuel buildup working pretty much exactly on target. I expected that tweaking that would be my main change after the test. In fact, I did change it on the fly in play, but I think I may revert back to my original values. The change was made because the gamemaster seemed to be running out of Fuel and would be unable to stop the marines winning. However, post-game discussions have led me to realize that the way the gamemaster spends Fuel makes a big difference to how effective it is. The next draft will include advice for the gamemaster along the lines of "If the marines are doing too well, allocate your damage to ruthlessly kill extras. If the marines are doing too badly, then allocate it spread over the player marines and extras without killing anyone."

The bits that really fell down were the cinematic action scene side of it and the inventing the story side.

For the action, it simply became too easy for the marine players to mention a couple of facts for bonuses, invoke their specialty, roll the dice and then count dead aliens. We had a few good stunt descriptions but not really enough. I'm going to fix this by changing how the combat results work. Currently, for every three points a marine player scores, they kill an alien. The new rule will be:
- For every 3 points you score, you may describe an alien-killing stunt
- Each alien-killing stunt must be original within the session (i.e. if someone has already said "I shoot an alien in the face" then you can't "Shoot it in the face". But you could "Shoot it in the face with a grenade launcher" or maybe "Swing round a door frame, shoot it in the face, and swing back"). This should give the action-movie style of focus on the heroes kills in combat but always adding gimmicks or twists to the moves.
- After you describe your new alien-killing stunt, an alien dies.
- If you can't think of a stunt, you get no kill.

The other big problem was with the mission template - the 'fill-in-the-blanks' description of what's going on. I think that the one I had was too open, so that play drifted a little and it was hard to focus on it. This will need to be revised by rewriting the template. I think I'll set up some mini-templates for the gamemaster, probably one for the beginning of each phase. These will allow them to say some details that should give the players a starting point without tying down the results too much. I'll reduce the number of optional facts per phase (maybe to none) and I would like to restrict the blanks a bit more. In general, the facts and phase structure worked very well and helped pace the game as intended.

Good stuff. I look forward to the next game, which will be in the last round of Wellington's Kapcon games convention in one and a half weeks.
Filed as:
Posted by Unknown at 20:46 No comments:

Read: The Voyage of the Beagle by Charles Darwin

Note: I won't be doing the monthly book review and counting totals thing this year because I can't be bothered. Just mention of books that... seem worth mentioning.

The Voyage of the Beagle was mainly of historical interest for me, but was much more interesting than I expected. Darwin was a good writer, with unexpected wry humour in many of his descriptions of people and places he visited. The science is fascinating too, both from the historical perspective and because he was such a careful observer. Worth reading, if you think you will like it. On a personal note, his description of visiting New Zealand was hilarious, as well. The only part he liked was an English-style farm set up by some missionaries - everything else he hated with a passion.

Expect more along these lines, as Make Tea Not War gave me an omnibus edition of Darwin. Expect notes on The Origin of Species, The Descent of Man and The Expression of Emotions over the next few weeks.
Filed as:
Posted by Unknown at 20:28 No comments:

Monster of the Week